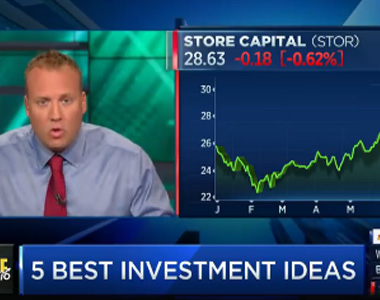 In a September 4, 2018 segment that aired on CNBC’s Fast Money Halftime Report, analyst Josh Brown emphatically described STORE Capital’s portfolio by saying, “It’s all of the businesses or tenants that Amazon can not Amazon!” He underlined the fast-growing net-lease REIT’s commitment to business sectors with long-term viability such as pet care facilities and health clubs.

Brown’s analysis began with highlighting Berkshire Hathaway’s stake in STORE Capital. Known as the world’s greatest value investor, Berkshire Hathaway CEO Warren Buffet historically had been reluctant to invest in real estate, but after several years of monitoring the company eventually purchased a 9.8% stake on June 26, 2017.

Brown concluded the segment by saying, “So you have the two smartest investors alive, Buffet and Marks, and I think it’s just an absolute home run for a ten-year hold.”

Joshua Brown is the CEO of Ritholtz Wealth Management, a New York City-based investment advisory firm. He has been named by The Wall Street Journal, Barron’s and TIME Magazine as the most important financial follow on Twitter. Josh’s blog, The Reformed Broker, (@ReformedBroker) is read by millions of investors, traders and advisors around the world.